In 2013, Sokratis and I co-founded Togethera, a private social network for families. It was designed to be simple enough for kids, grandparents and your least tech savvy relatives to create a timeline of cherished family memories. Togethera brought thousands of families around the world closer together before shutting down in 2016.

I designed our iOS, Android and web products and led the world-class engineering team that built them. Apple and Google featured our apps dozens of times over the years, but the best recognition came from the reviews and messages of thanks from families whose lives Togethera touched. 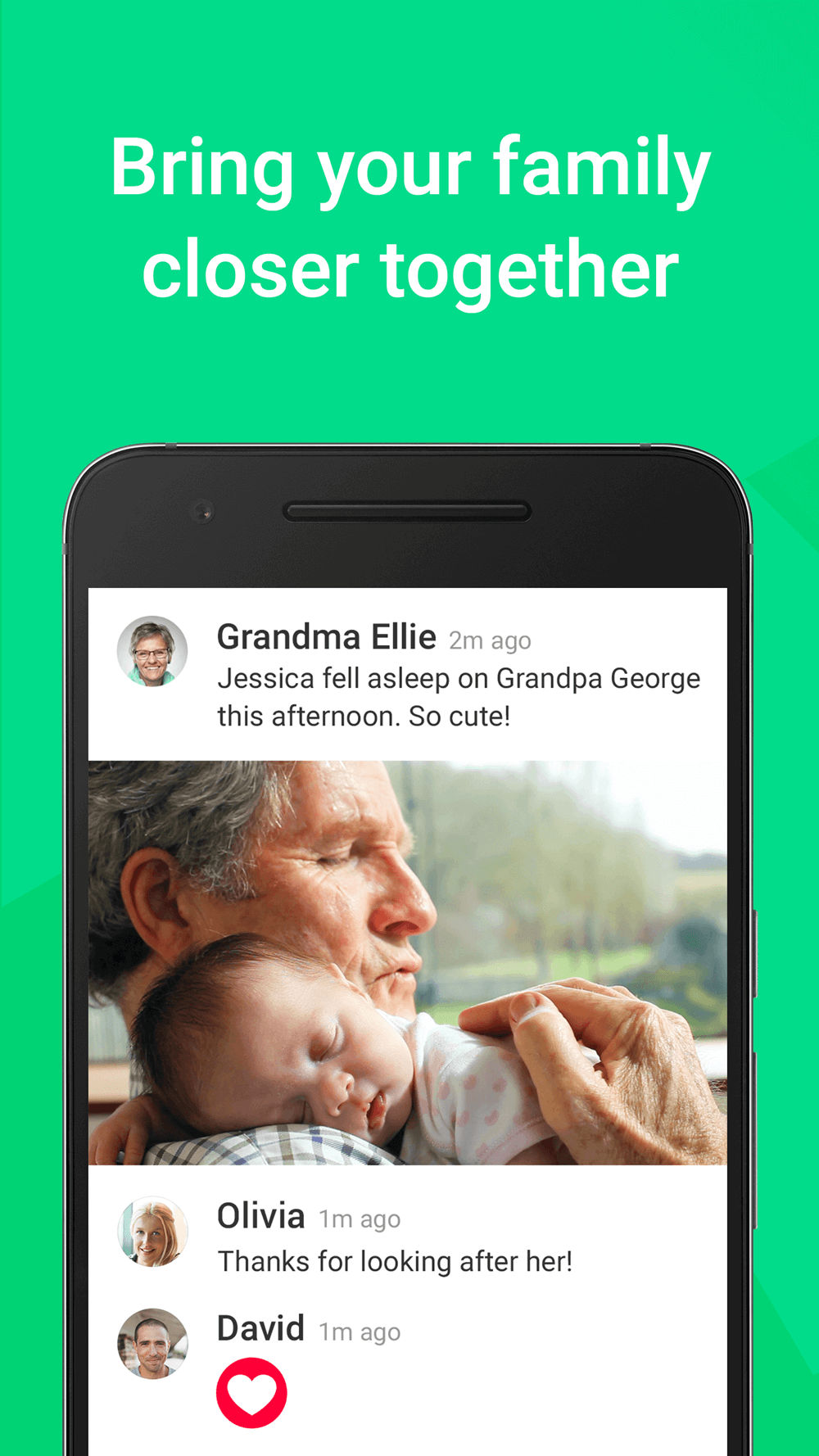 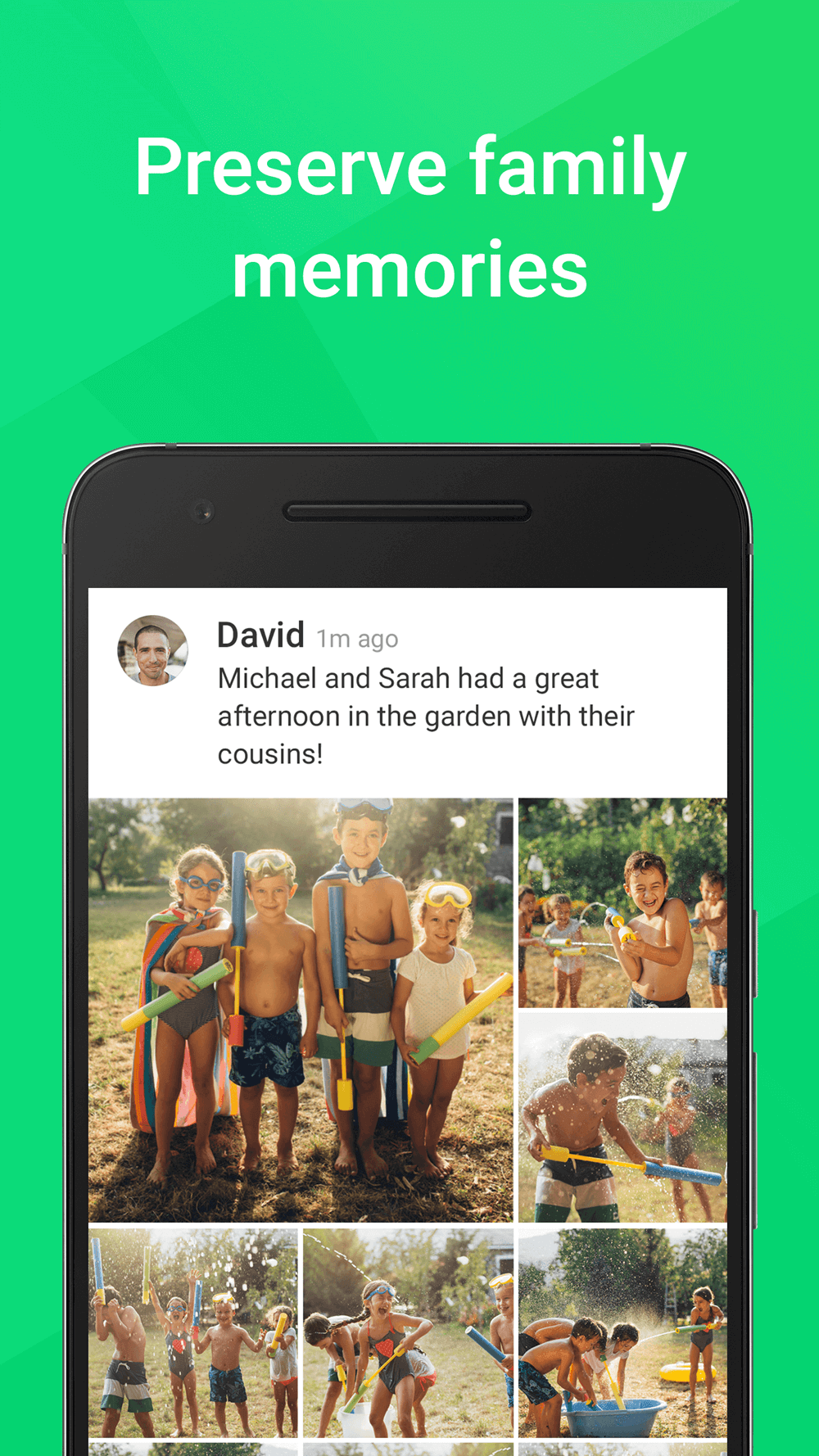 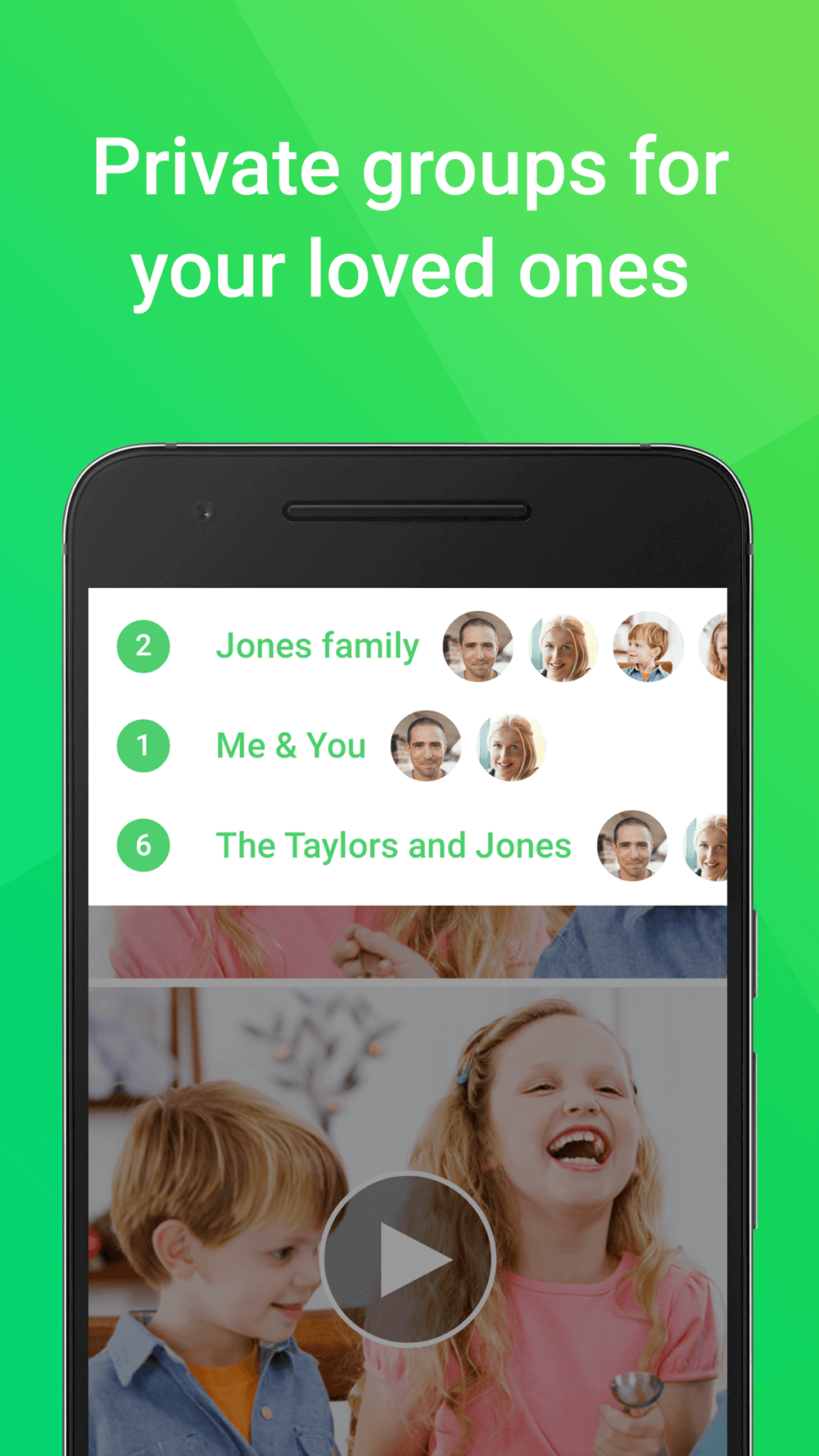 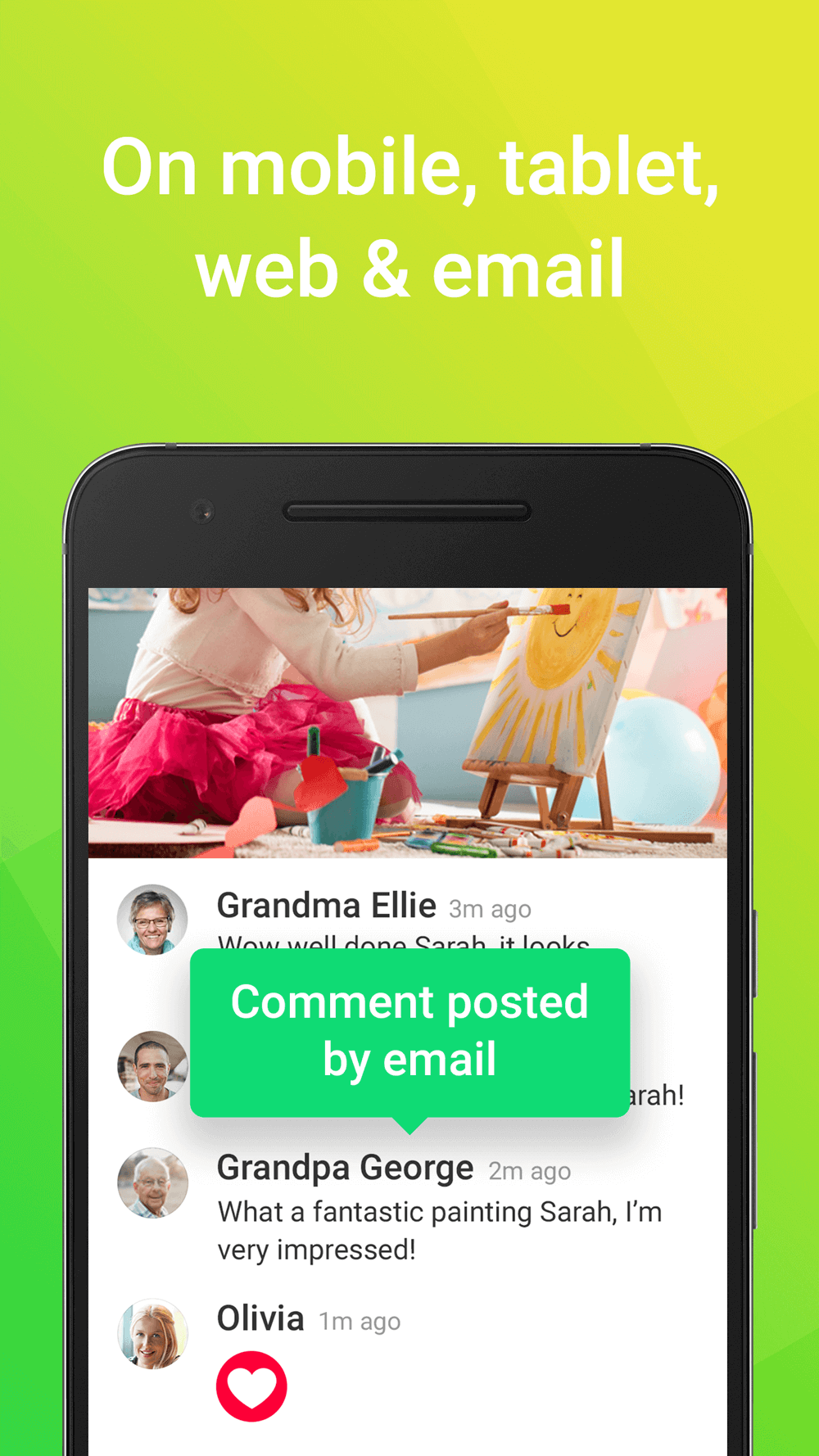 Our promise to non tech-savvy users like my grandmother was that all they needed to do was swipe up and down on a single interface to keep up to date with family news - they’d never need to leave the timeline.

New posts arrived with full-width photos and fully expanded comments, reactions could be added just beneath without leaving the screen.

After you’d viewed a post once, it’s photos collapsed into a beautiful grid, but the comments remained expanded while the conversation continued.

7 days after the last family member commented on a post, it’s comments were hidden, transforming the timeline into a photo album. A post could be re-awoken with a tap.

Notifications in the timeline

Active families shared dozens of photos and comments on different posts daily. To avoid the standard notifications list UI you’d have to switch back and forth from to see every new comment, we built notifications right into the timeline. Tap the updates button to scroll to the nearest new comment, and keep tapping until you’ve seen them all.

Lots of users had multiple groups - their family, their partner’s family, extended family, even groups of friends. We wanted to make it easy to share to multiple groups at the same time and never worry you might be sharing to the wrong people.

I now prototype interactions in Principle, but before that I used HTML/CSS/JS. These are a few of the more fun ones which we ultimately never implemented because of time/complexity constraints: Post to other families, Post to current family, Notification spinner (play with the green buttons).

I made several promo videos for Togethera and Upshot, filmed using iPhones and edited in Screenflow.

We spent a lot of time perfecting our photo sharing technology. We had a much faster experience than other photo sharing apps, and stored the full-resolution photo for backup and printing too. 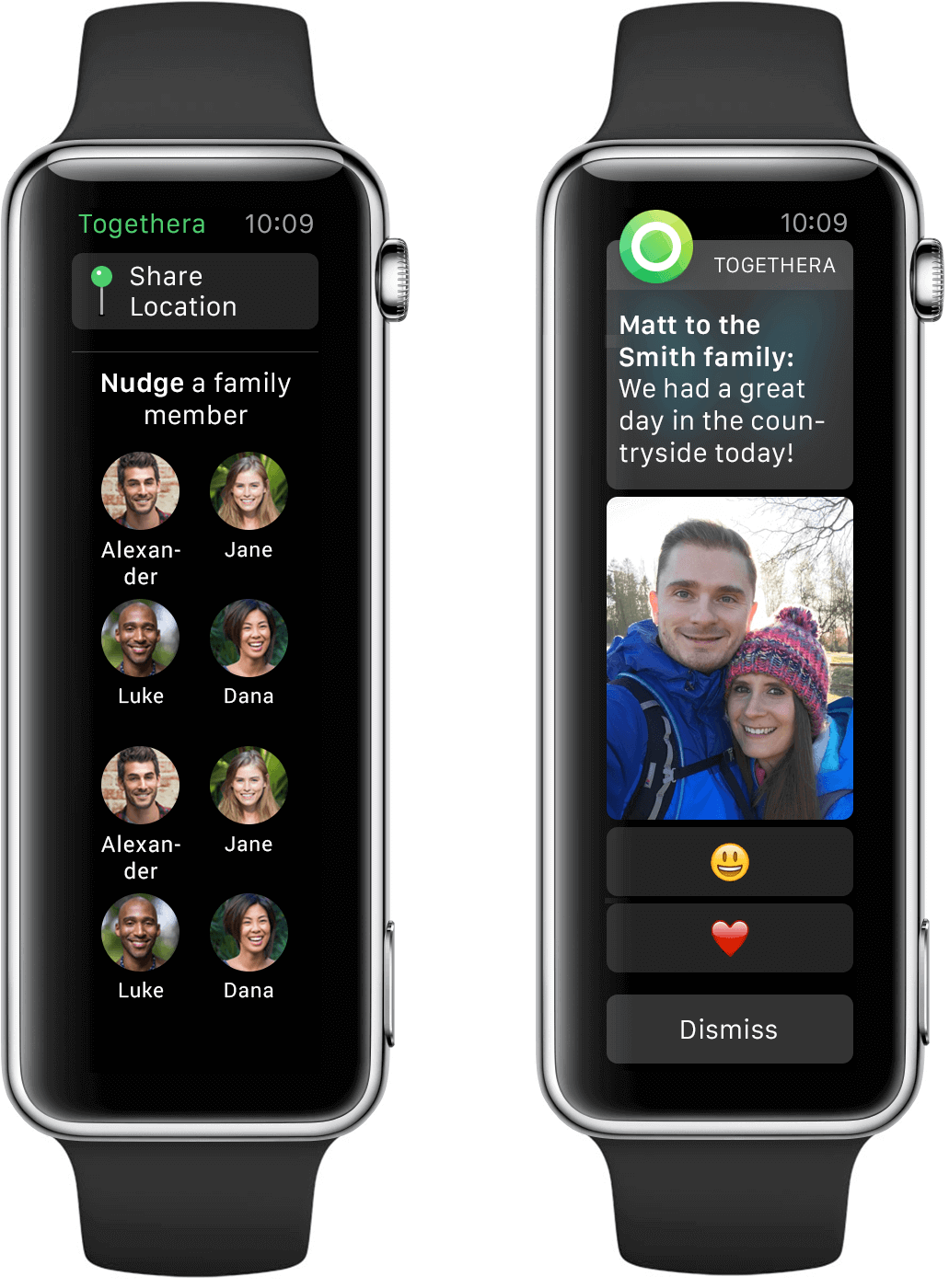 In 2015 Apple invited us to build an Apple Watch app and test it on the pre-release hardware at their UK HQ. 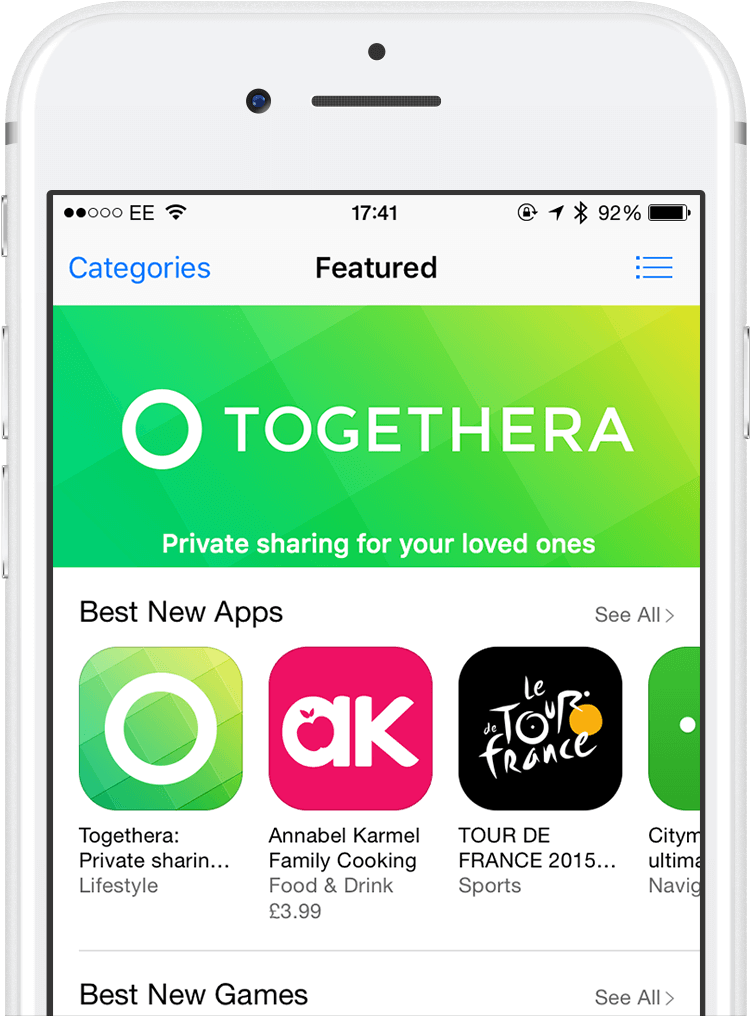 We were very fortunate to be regularly featured by Apple in the App Store. We collaborated closely with the App Store Team in London to incorporate new technology like live photos, force touch and share extensions upon launch. 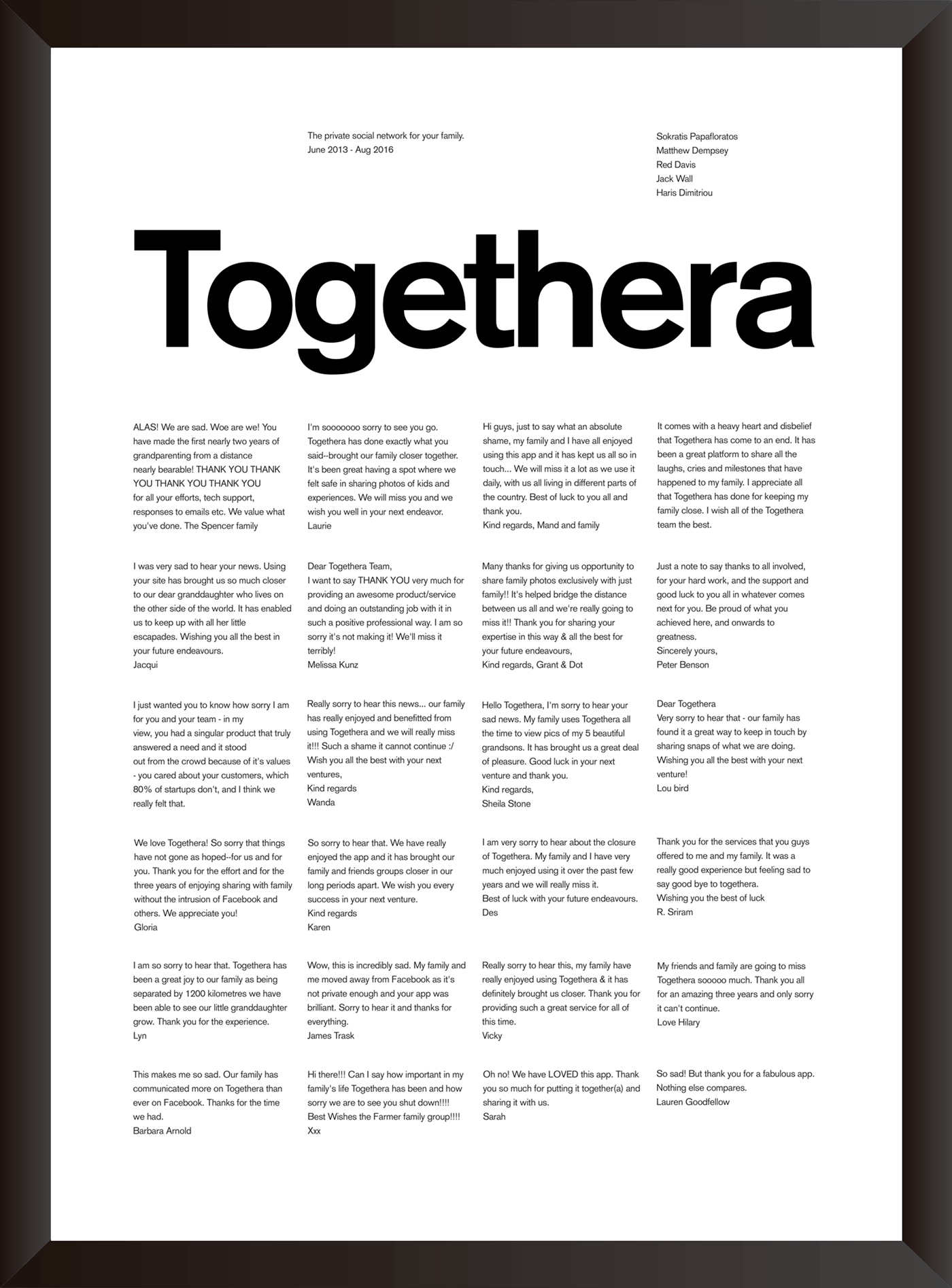 When we announced the shutdown of Togethera we were flooded with user emails of sadness and appreciation. I made and framed a poster for every team member with some of the best messages.

When it became clear Togethera wouldn’t reach the critical mass required for profitability or a further round of financing, our team built Upshot.

Upshot solved the problem of groups of friends hassling each other the day after a get-together for the photos. Your group switched live-streaming on at the party and closed the app. All the photos taken with your normal camera app were automatically synced with the group in the background.

As with Togethera, I designed the mobile products and led the engineering team to build them. The Apple Editorial Team featured Upshot under 'Editor's choice' globally at launch.

Live-streaming your camera roll proved a little too 'risky' for users, so unfortunately we shut down Upshot in 2016. 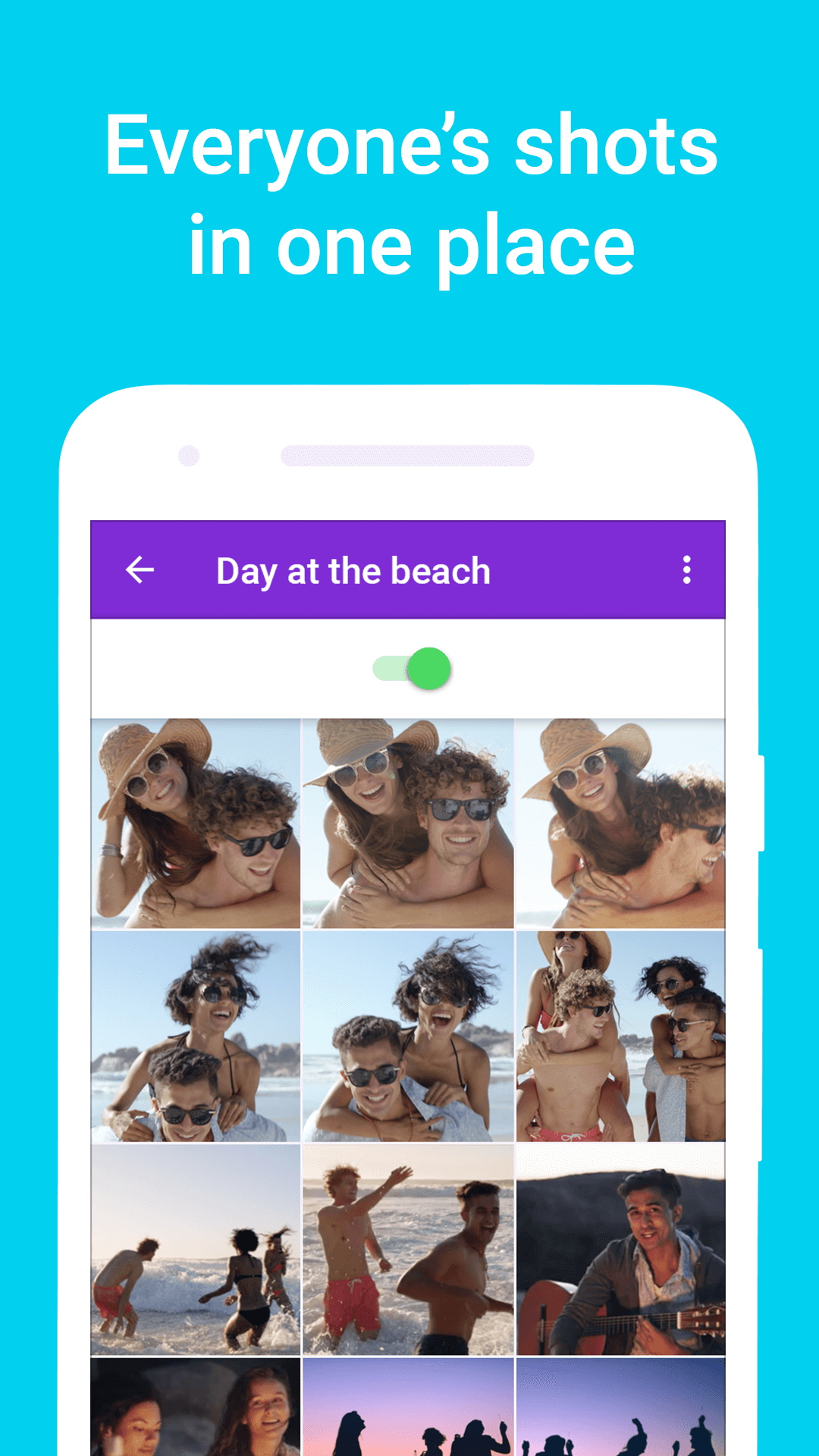 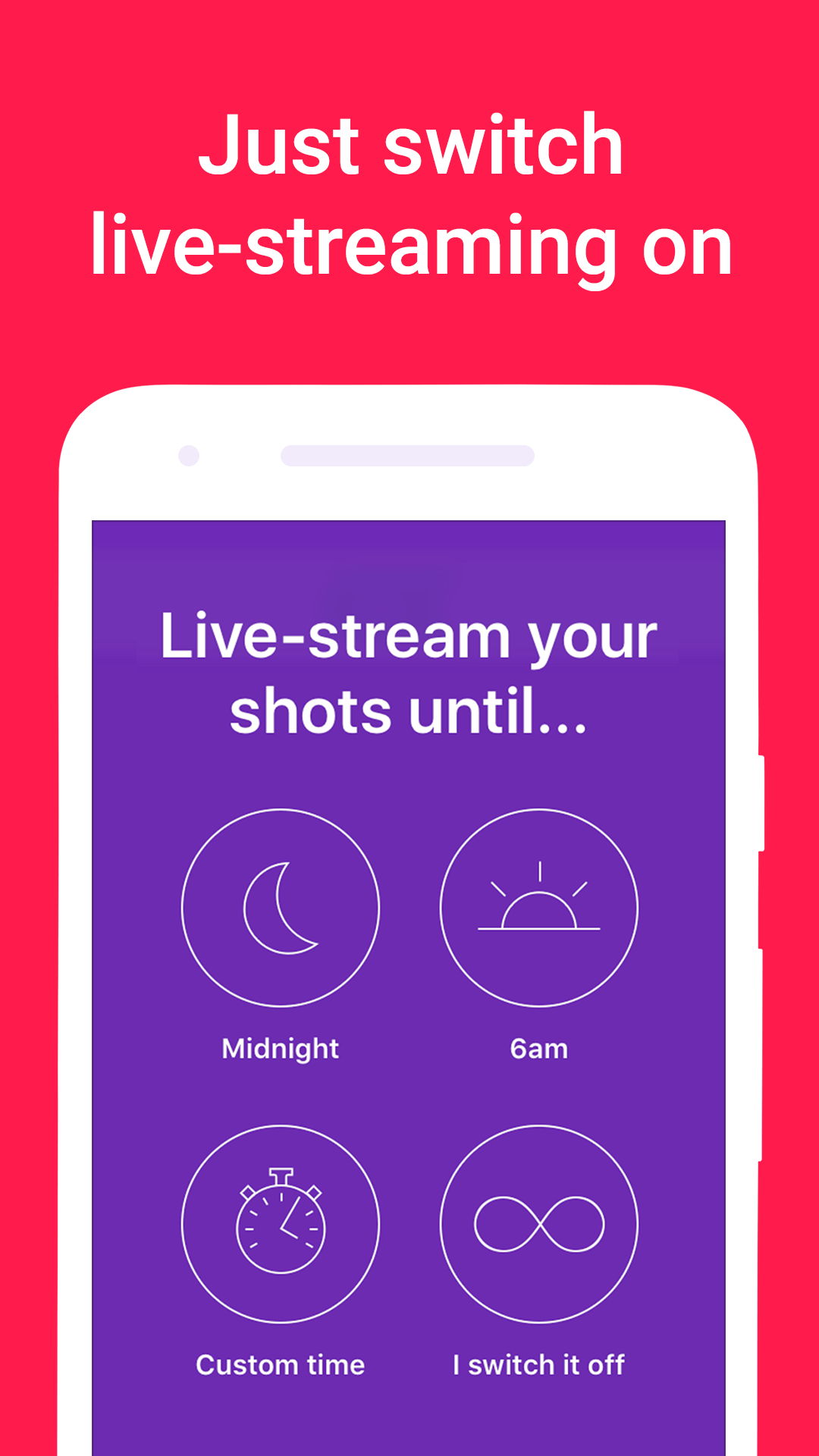 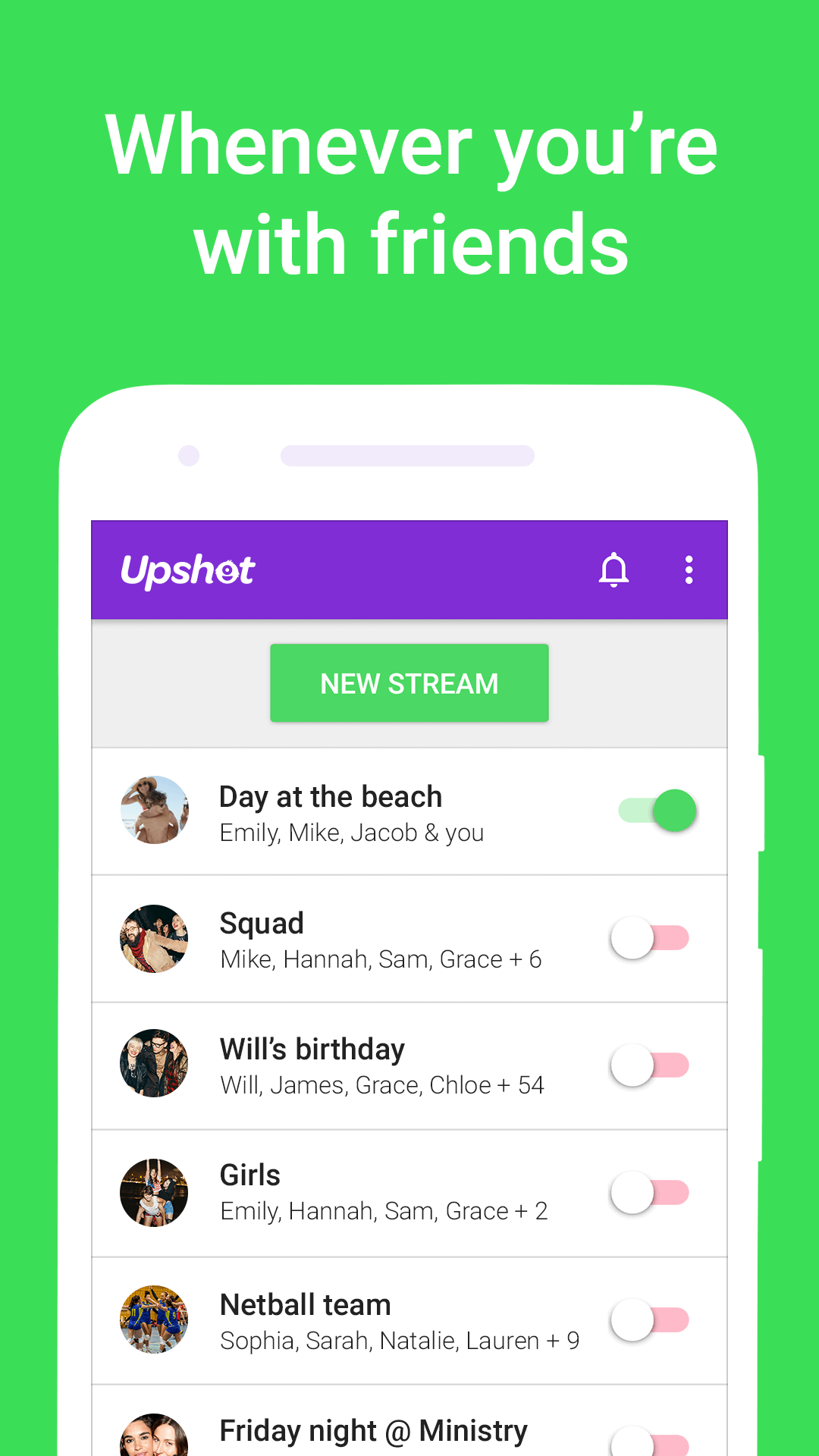 This is a quick, unpolished screencast of the onboarding and main features of the app.

I put this video together for our App Store listing. 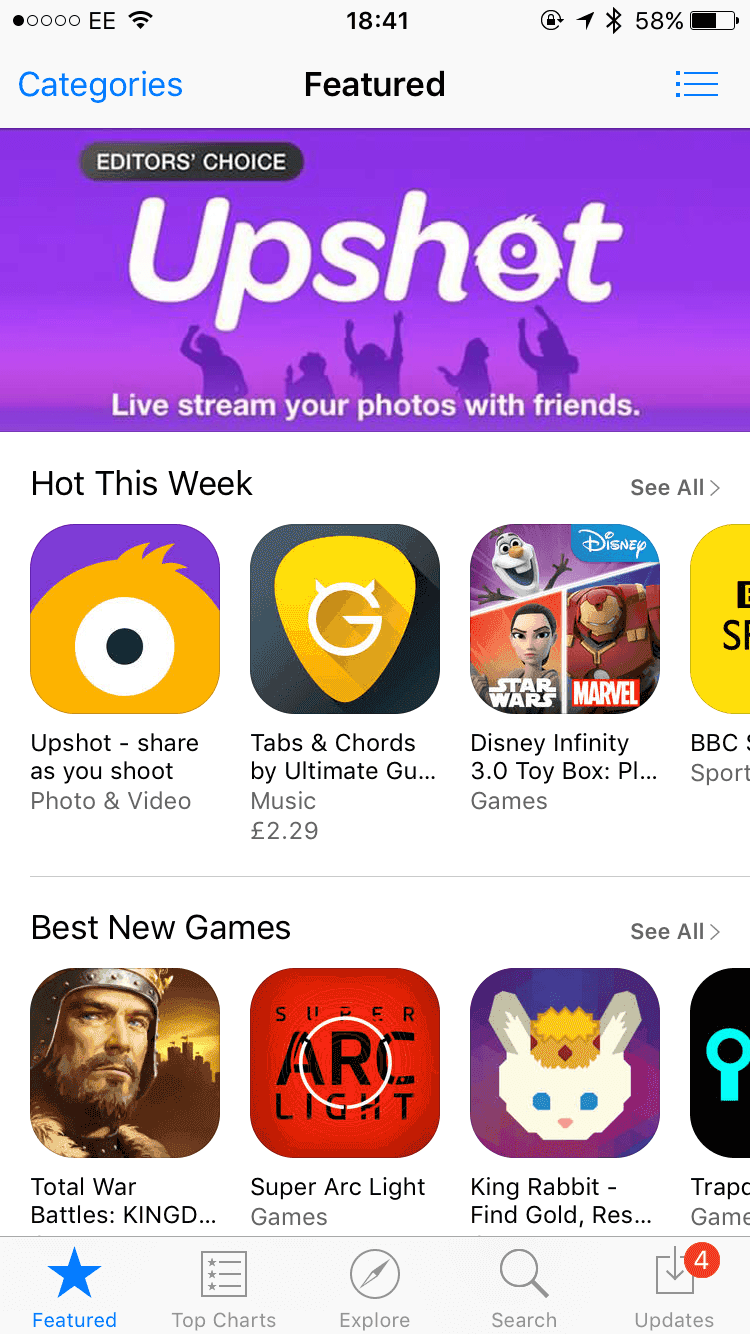 We collaborated with the App Store team before we launched, and they featured us globally on launch day, including as 'Editor's Choice'.

In late 2016 the Togethera/Upshot team explored an idea we called Penny. The vision was to build an automated personal assistant to manage your household bills - insurance, energy, broadband, TV & more.

I learned a lot about insurance, regulation and the FinTech space in general. We designed and prototyped some interesting ideas, but ultimately decided not to pursue the idea further.

Built in Principle, this early prototype was used to communicate our vision to investors. 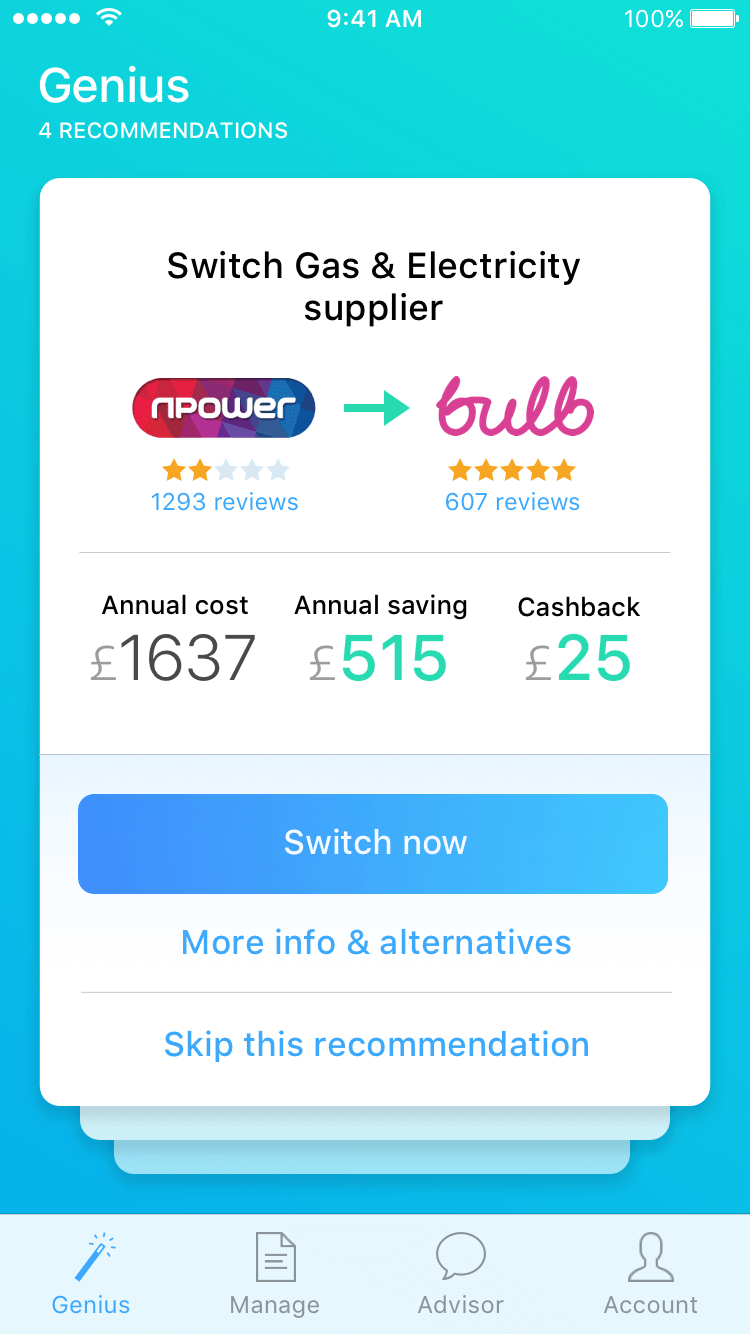 A stack of cards with easily actionable recommendations to save you money. 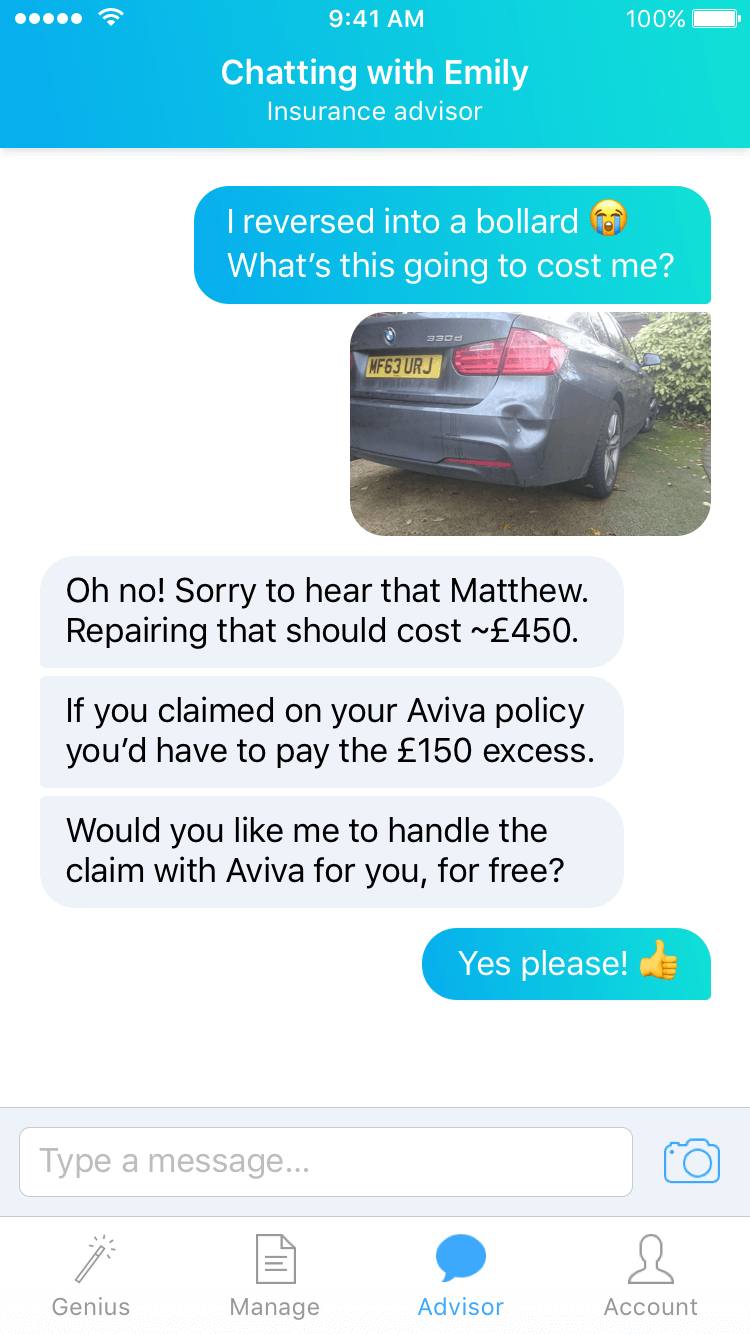 Receive advice and recommendations from an expert in insurance or household finances.

In 2011, after a designer at Facebook saw my ComicSansCriminal project, I was approached to join Facebook as a Product Design Intern at their Palo Alto campus in California.

I designed their contextual same-page help interface, redesigned and standardised every Facebook email, built several internal tools and worked with other designers on numerous projects. 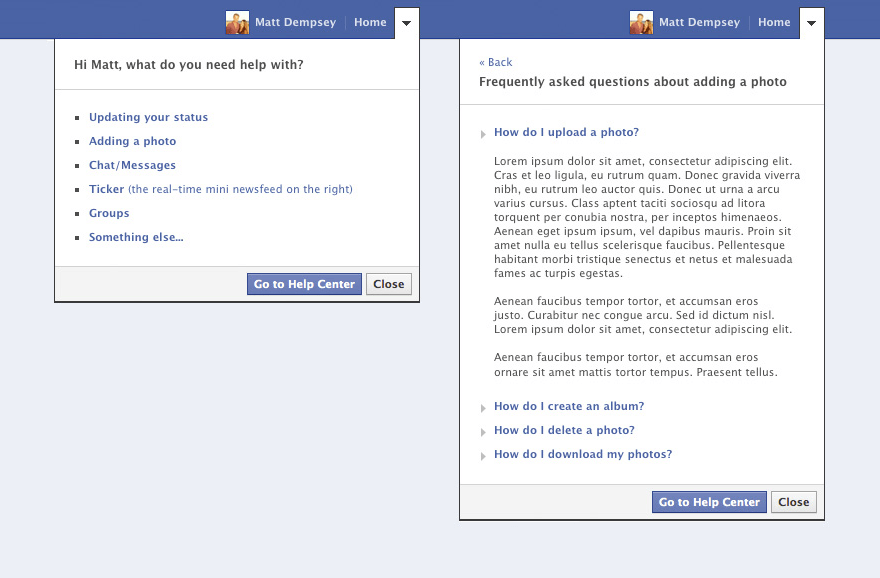 “Matt was an amazing intern to have on the Facebook design team. In three short months, he designed two projects end-to-end with a thoughtful, holistic approach. Matt also took a lot of initiative to collaborate with other designers and give feedback on their own projects. I look forward to working with Matt again in the future.” 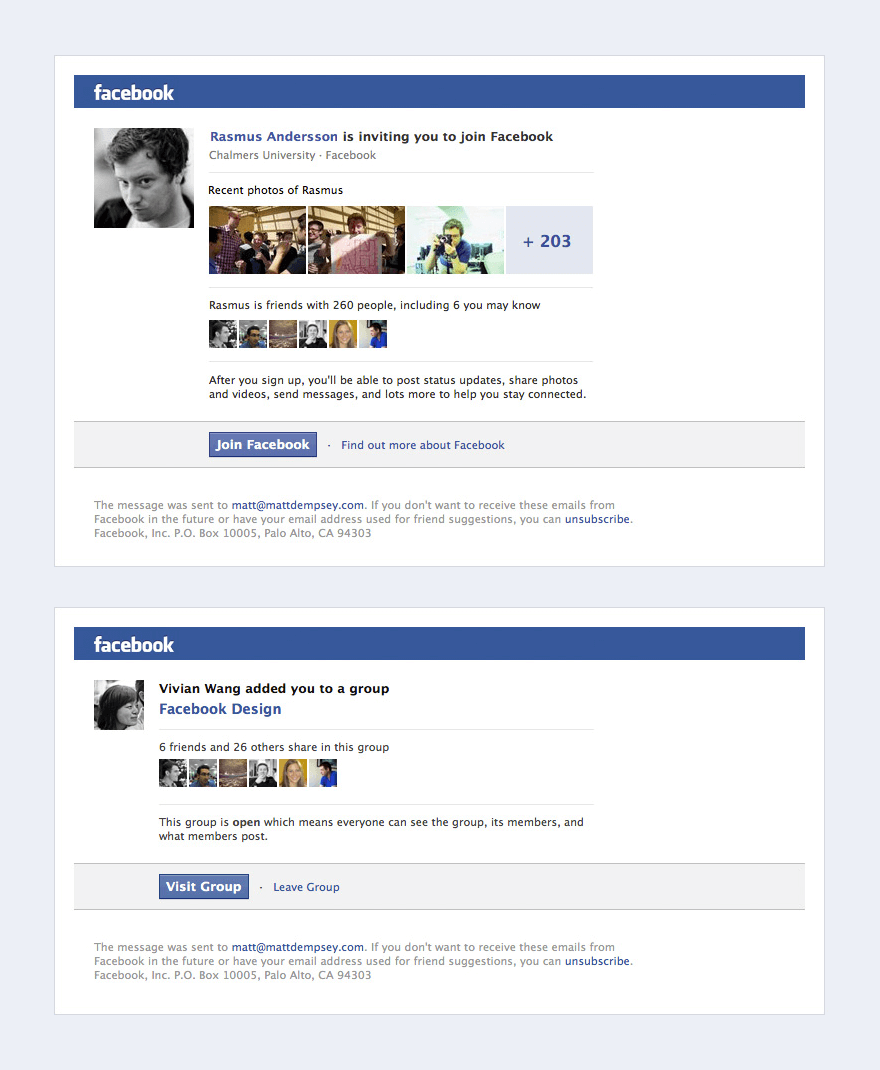 In 2011 while at university, I joined the Camayak founding team on a part-time basis to design their content creation and workflow management tool for newsrooms. Publishing giants like NYTimes had complex multi-million dollar custom CMS's and everyone else had WordPress, designed for the individual. Camayak bridges the gap.

Managing a newsroom is complicated, and solving the intricacies of the content creation process through design was an interesting challenge. Working with Camayak's small and nimble team really sparked my passion for working with startups. 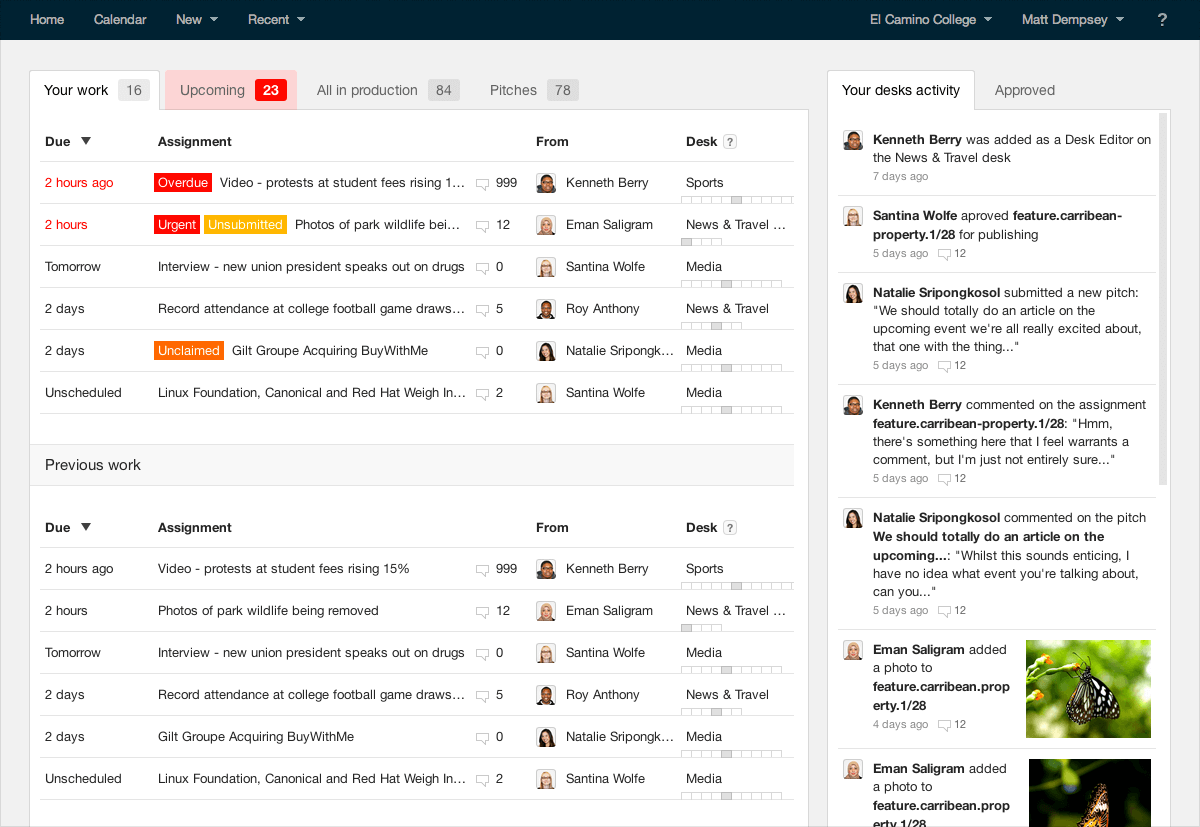 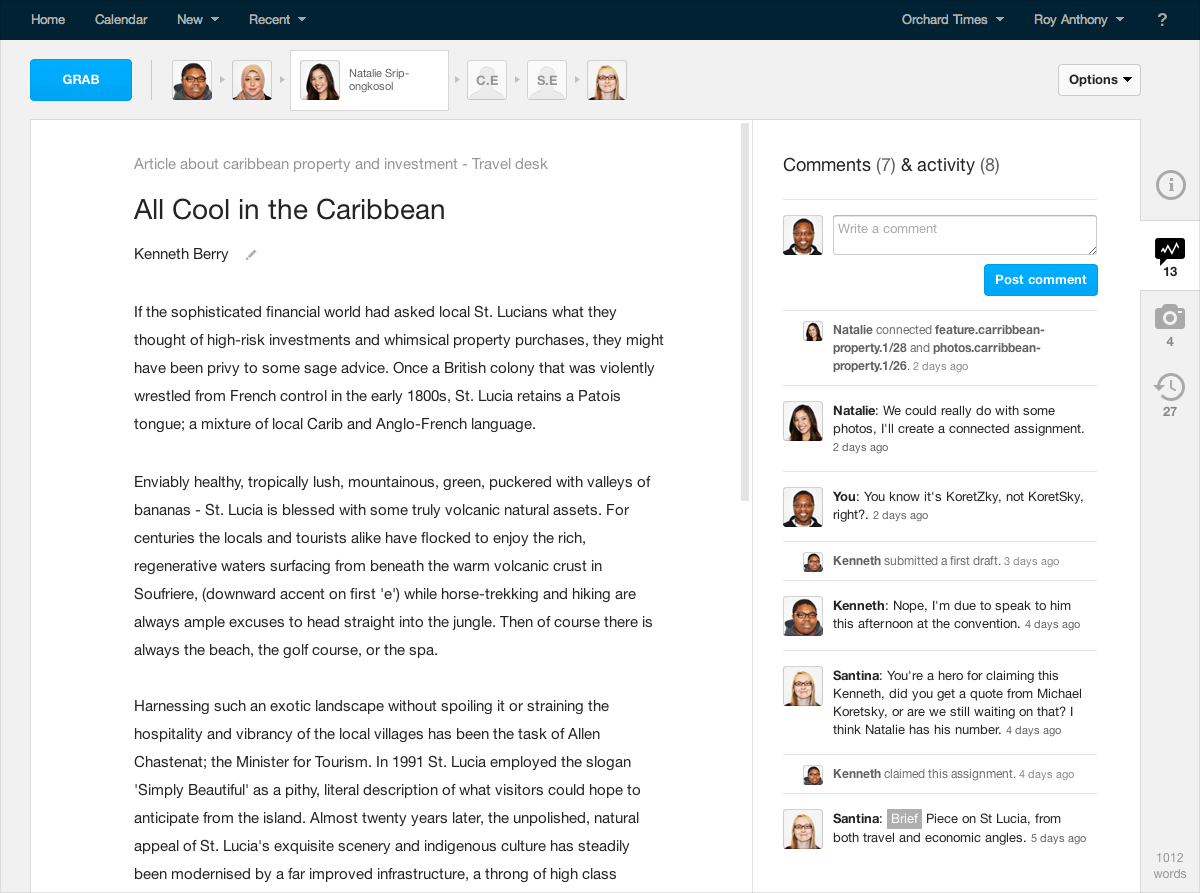 Comic Sans Criminal is a tongue-in-cheek personal project I worked on while at university, to explain why you shouldn't use the font Comic Sans. It was put together quite quickly for fun, but the public response caught me by surprise.

It was picked up on Reddit and Hacker News and viewed by over 1 million people in the first week, and over 3 million people to date. It's also what landed me my Facebook internship. 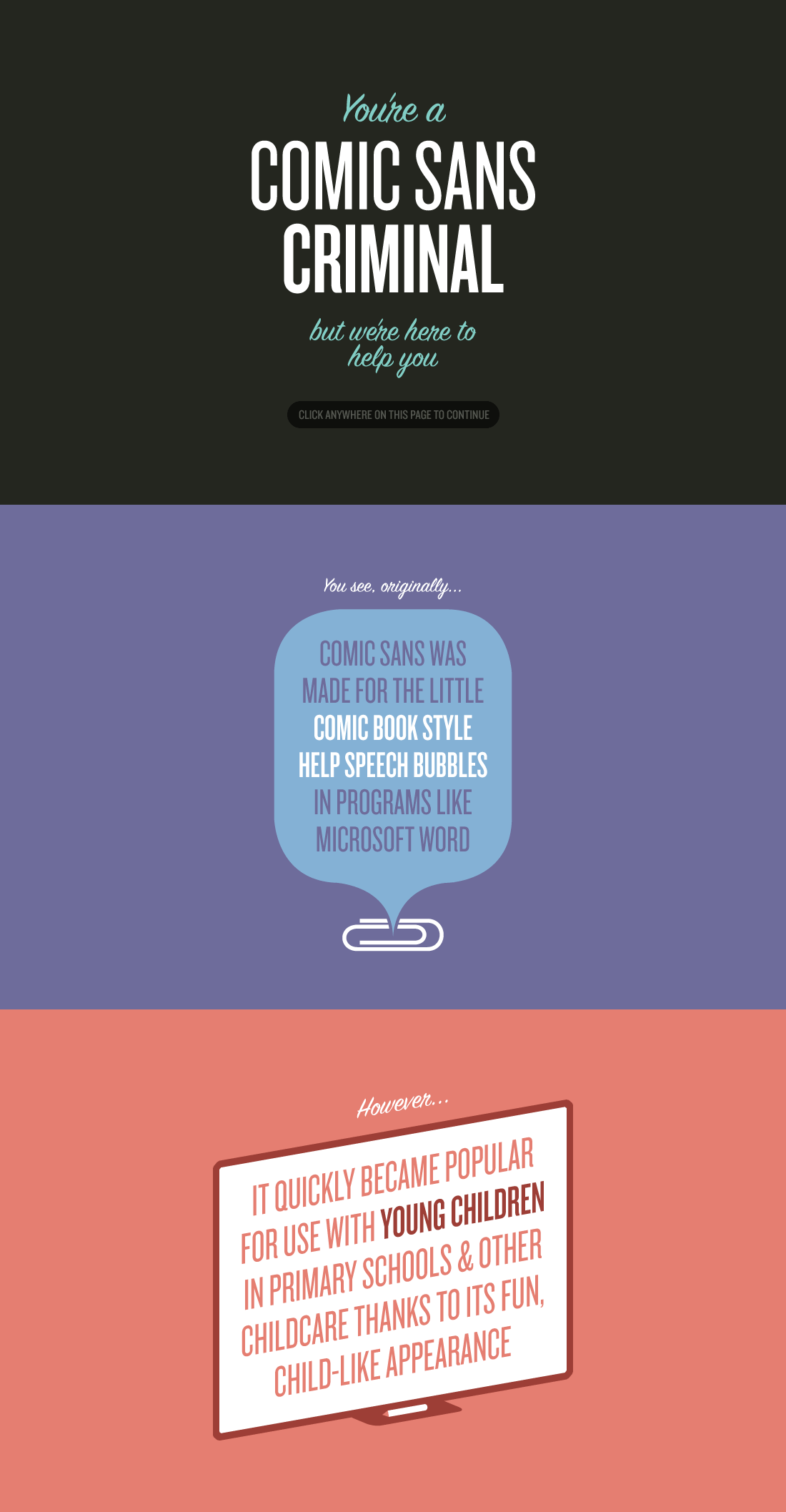 Inception Explained is an experimental parallax scrolling infographic that tells the story of the film inception. It was one of the first sites built with this technique.

Because the technique was novel and Inception is a complicated film to understand, it went viral and has been viewed by over 2 million people since. 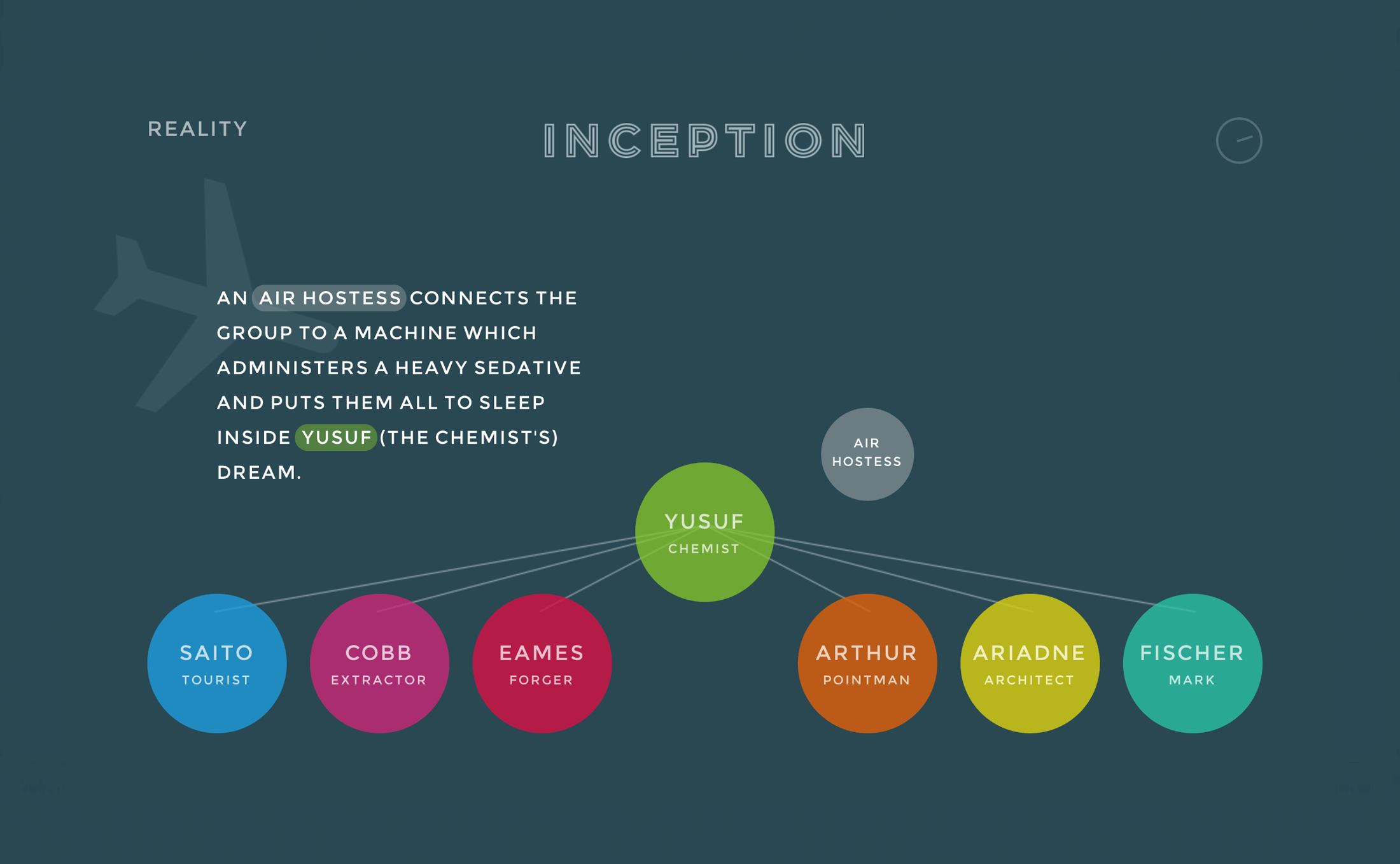 You can email me at matt@mattdempsey.com